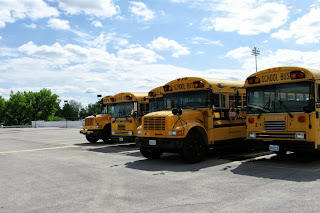 During the consent agenda, Superintendent Jay McCracken bought the issue of problems with the new bus service — Johannes Bus Service — to the members of the school board. McCracken explained he was suggesting the district short the company 10 percent of their August salary for poor service and multiple violations of contract.

McCracken and building principals Ronda Cross and Mike Carlson explained multiple problems the company has had with the district since starting the school year. One of the biggest was that in the original contract, the district had stipulated all buses should be equipped with two-way radios and digital video cameras. Cross and McCracken reported many of the buses don’t have the digital video cameras in the buses used on routes for Putnam County children.

In addition to the contract issues, there have been problems with buses arriving excessively early or late to school bus stops, causing children to miss buses; seating charts not being made or enforced on bus routes; and younger children not being bought back to the school when a parent or guardian is not at the bus stop to pick up the student.

Cross also reported during registration, Johannes left early for a total of six hours between the two days they were supposed to be on hand to explain bus routes to families in the district. McCracken, Cross and Carlson also noted the poor customer service they have received when calling Johannes that ranged from an average two-day return call policy by the company to answering the phone with the phrase “what have we done wrong now?”

All three administrators noted while they assumed there would be problems at the beginning of the year and were willing to work with Johannes, it seemed like the company was simply not able to handle the district’s transportation needs. They also noted some of the office people at Johannes just seemed overwhelmed. McCracken also emphasized the district was not upset with the individual drivers of the company but the customer service and owner response to the problems the district has had.

Several board members commented on the problems the district had been having with Johannes. All were concerned with the apparent lack of concern from Johannes to the district’s issues.

Jason Johannes, one of the owners of Johannes Bus Service, was in attendance and at first seemed almost nonchalant about the incidents he was informed of by the members of the administration during the meeting. McCracken and Johannes had previously discussed the 10 percent shortage of payment over the phone, and Johannes had disputed the plan.

McCracken then brought the issue back up at the conclusion of the presentation. Johannes formally apologized on behalf of the company and agreed a 10 percent shortage on the payment of the August bill would be accepted after McCracken said the next remedy would be to talk to the district lawyers about taking other steps to deal with the contract between the district and the company.

In old business, the board then passed the Fiscal Year 2013-14 budget after reviewing it in the public hearing at 6 p.m. before the regular board meeting. According to McCracken, all funds are anticipated to be in the black at the end of the fiscal year.

McCracken also introduced the district’s performance evaluation reform act, which is being worked on during the current school year. Ultimately this plan will develop an evaluation tool for staff that is to be implemented by the 2016 school year.