Wednesday, April 29, 2015
Tonni Wink and her children, Megan and Bradley, lost their home and belongings in a devastating fire Tuesday — 15 months after the tragic passing of husband and father Ron Wink.

Wink’s two-story home was fully engulfed in flames by the time the fire department was called late Tuesday morning.

“A farmer in the field noticed the smoke, and by the time he traveled around, he saw fire on the east side (of the house) and wires burning off the house. So, it had been burning for a while,” said Standard fire chief Mike Skowera. “There was nobody in the house, but I believe there was a dog and some cats.”

Standard Fire Department received mutual aid from Cedar Point Fire Department and then quickly called for more help after seeing flames and smoke and recognizing it as a “fully-involved house fire.”

“We have Cedar Point and Granville as automatic aid, but I also did request extra equipment from them before I left the station,” said Skowera. “I also called Tonica for mutual aid and McNabb for mutual aid.”

According to Putnam County Sheriff Kevin Doyle, Standard did not have more water available than what it had in its trucks, as the water tower is undergoing maintenance work at this time.

“Initially there just wasn’t enough water here. We got tankers from Cedar Point, McNabb and two from Standard. Granville has a pumper tanker. There are four designated tankers here,” Skowera said at the scene. “This issue, more than water, was more that it was too far gone.” 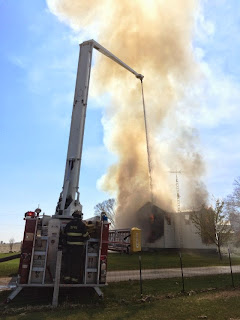 Timeline
As of 11:20 a.m. Tuesday, the two-story farmhouse was crumbling, with aluminum siding melting, being consumed by flames in all parts of the house. Firefighters had emptied Tonica’s water truck and were emptying McNabb’s tanker by 11:33 a.m.

At about 11:37 a.m., firefighters were starting to approach the house to battle the fire from the ground. Initially, the battle against the blaze was done from relatively long distance, with firefighters spraying water from pumper trucks and Standard’s snorkel truck.

Skowera said approximately 14,000 gallons of water had been used as of 12:30 p.m., and the house was still burning.

By 2:30 p.m. the State Fire Marshal’s Office was contacted, as firefighters continued to fight the fire. More information on the cause of the fire, if determined, will be available at a later date.

American Red Cross was on hand Tuesday afternoon. According to Steve Swett, Red Cross disaster services volunteer and county lead for three area counties, the Red Cross would assess the needs of the family and provide blankets, toiletries and other necessities, as well as providing lodging vouchers for three days. Swett said the lodging vouchers would help the family until insurance could kick in.

The family’s insurance agent also was on the scene.