Wetlands Initiative Does Much More Than Stock Fish at Hennepin

Monday, June 05, 2017
About two dozen volunteers planted native plants to give nature a helping hand Saturday on some of the earthier former farm ground at The Wetlands Initiative’s nature preserve south of Hennepin.

Recently, TWI acquired 400 acres southeast of the former Hennepin and Hopper Lakes and is restoring the area it calls Hickory Hollow back to Mesick prairie, sand prairie, oak savanna and hill prairie.

After acquiring the area and attaching Hickory Hollow (still closed to the public) to the 2,600-acre Dixon Waterfowl Refuge, the nonprofit organization planted prairie seed, with more of the wildflowers taking hold on the sandy ground than on the better farm ground.

It was just another restoration step for a group that’s made rapid headway since 2001 toward restoring now-3,000 acres to resemble Illinois of 300 years ago.

Rich Seibert, superintendent for the privately owned site for 16 years, talked recently to the Better Fishing Association about some successes and setbacks in attracting and accommodating native species and re-creating prairie, woodland, wetland and shallow lake habitat.

But many of the BFA members wanted mostly to hear about fishing and the fish in the lake that’s protected from the river by levees that date back to the early 1900s. He reviewed the well-publicized war against common carp, which made up about 98 percent of the fish species in the drainage ditches before pumps were turned off to allow the below-river-level area to refill with water after decades of the drainage district being farmed. He noted if corn prices were $7 back in 1999-2001 rather than in the $2 range, Sue and Wes Dixon Waterfowl Refuge area likely would still be farmland.

Before allowing water to fill the old lake area, the state used natural, plant-based fish killer rotenone to try to kill all the carp. Years, later, they realized the carp ran away from the rotenone and up into the drains that were delivering fresh water from higher ground. Enough of them, some small, were able to stay in the field tiles (pipes) long enough that they survived to overpopulate the lake. So, TWI drained the lake again and this time blocked the tiles so the carp couldn’t get in.

When the lake was drained, the DNR helped net the gamefish and tried to hide them away in the Emiquon refuge and the Hormel ponds at Bureau. Seibert retold a story that when the fish-stocking truck backed up and started dumping in the prized Hennepin-Hopper Lakes gamefish, including trophy-sized bass and walleye, there were two fishermen on the banks. Why they didn’t keep the secret and enjoy the Hormel Ponds for themselves for a couple of years, he does not know.

“I heard about it the next day,” said BFA member Fred Reutner, a former Mendota bait shop owner who fishes almost daily.

Seibert said in five years since then, and since the lake was restocked with many more predator fish — including northern pike, bowfin (dogfish) and alligator gar — no common carp have been found in the lake. And TWI stocked the predators, also including crappie and bass, in part to bring back native species such as alligator gar and bowfin and in part to have plenty of fish that would eat tiny carp if a bird dropped one, perhaps. 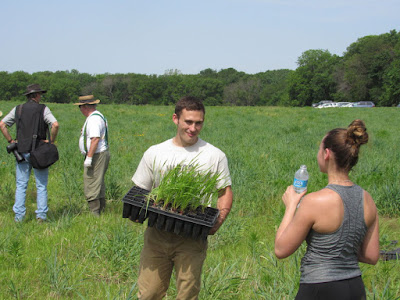 Seibert said none of the alligator gar that were stocked have been found during sampling and shocking, but they don’t fit well in nets and they may run from electric current. He said not many northern pike were found during DNR sampling, but fishermen using the lake since it opened for the season on May 16 are catching lots of northern pike in the 24-inch to 3-foot range. He said there are so many that the Wetlands rules allow harvest of northern pike as small as 24 inches. “Some guys catch 20 northerns and keep three,” he said.

The season closes Sept. 1, and people who fish have to sign in and put a parking pass on their dashboards. No boat motors are allowed but many anglers are finding kayaks to be as good as anything for fishing the shallow lake. Fishing from shore is not allowed, as the lake is shallow and surrounded by plant life that TWI wants to protect.

“If the fishing’s good, fishermen will find a way,” Seibert said.

In addition to the gamefish, the lake has become home to a rare type of topminnow that is thriving in extra-shallow weedy areas, as well as rare red-spotted sunfish, which also seem to be thriving.

And the entire 3,000-acre property has rapidly become an attractor of some of Illinois’ rarest birds and wildlife. Yellow-headed blackbirds, common to the Dakotas but not Illinois, can be found in the weedy wetland, and in the past month, sandhill cranes nested at the site. An new trail has been added, due to investment by Marquis Energy, at the north end, and the addition of the 400-acre Hickory Hollow area at the southeast corner of the site will become restored habitat and also buffer a hillside prairie and bluffside seep (springs).

He said the Field Museum’s Doug Stotz has advised The Wetlands Initiative on habitat re-creation and has helped identify the birds, common and rare, attracted to the habitats. He travels the world as an ornithologist, and, says Seibert, “this is one of his favorite places in the world.”

TWI’s Dixon Waterfowl Refuge is a recognized state Important Bird Area under this program administered by the National Audubon Society.