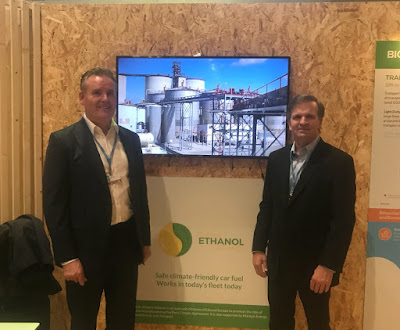 Early Thursday morning, Marquis Energy tweeted that Marquis Energy’s CEO, Mark Marquis, is speaking at the United Nations Framework Convention on Climate Change to discuss the benefits of biofuels to the environment.

The Hennepin-based company, the largest dry-mill ethanol facility in the United States, has been tweeting and retweeting on its Twitter about Mark Marquis’s trip to Germany.

The company has joined with other ethanol producers and their industry trade associations to form the Climate Ethanol Alliance, said Danielle Anderson, executive assistant/director of public relations and political affairs for the company.

“Our attendance at this conference allows us to share ethanol’s many benefits with all corners of the globe,” said Mark Marquis, CEO of Marquis Energy.

The climate change conference is in Bonn, Germany. Leaders of national governments, cities, states, businesses, investors and others are gathering to speed up work on climate action to meet the goals of the Paris Climate Change Agreement, according to the United Nations.

The United States indeed does have a delegation at international climate talks in Bonn, The Associated Press noted, even though President Donald Trump has promised to withdraw the U.S. from the 2015 Paris climate pact where nations set their own goals to reduce the emissions of heat-trapping gases. Because of legal technicalities America can’t get out until November of 2020.

This year is the first time ethanol (biofuels) has been represented at the convention, Anderson said, and they’re happy to talk about the benefits of their renewable fuel.

She said ethanol significantly reduces harmful greenhouse gas emissions from vehicle tailpipes. Ethanol is a U.S. homegrown fuel that provides the nation with more energy security and a more affordable choice at the fuel pump, she said.

Anderson said regular gas is almost all blended with 10 percent ethanol. She said more gas stations are adopting higher blends of fuel, such as E15 and E85.