County Board listens to presentation, that would still need to go through public hearings

The Putnam County Board on Monday was slated to hear a presentation about the economic impact of wind farms, but several landowners, and their attorney, want to squash that idea before it takes flight. 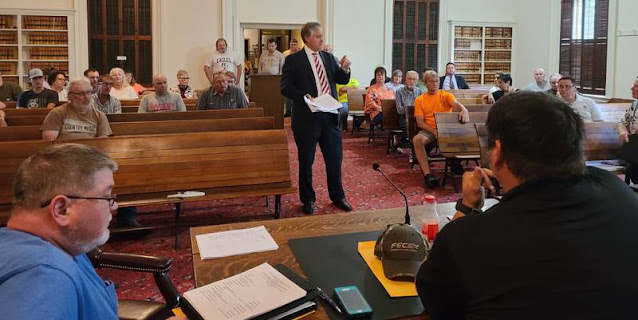 Richard Porter of Hinshaw and Culbertson, with a Rockford office, implored the board, on behalf of a room full of landowners, to put a moratorium on discussions involving wind power coming into the county, saying the county’s ordinance is out of date and needs reviewed.

The group has not yet made an application in Putnam County, nor has the board spoken with them, Board Chairman Charlie Lenkaitis said, but opponents want to take measures to shut down talks before they begin.

Should they make an application, Porter said, the board would have to begin a series of public hearings, but issuing a moratorium would instantly block any applications while the board addresses a possible new set of ordinances to address the possibility of allowing wind turbines in the county.

“To our knowledge, no application has been made yet,” Porter said. “Scout is here to present about wind energy and it’s wholly inappropriate for them to speak if we don’t know what they’re going to say. The wind energy ordinance is out of date and we want the board to halt discussions until the ordinance is up to date.”

Porter pointed to the current set back ordinance, which addresses the distance from which a tower can be installed, saying the current ordinance would have a negative effect on platted property.

A vocal opponent of the not yet proposed project, William Sherman III, told the board wind energy is not the way to go for the county.

“I came to protest wind turbines,” Sherman said. “It really upsets me losing the coal plant-wind is not the way to go, it’s like peeing in the ocean.

“It’s going to cost me $10,000 to $100,000 a year to spray fungicide from the air (if a windfarm comes in). So many people don’t want to see any of this. I don’t want to see the landscape of the entire county ruined,” he said. “I’m going to hire Mr. Porter to go after anybody and everybody I can to reimburse me for fungicide costs.”

“We want the county to stay the same and not look at ungodly eyesores, " Sherman concluded. “Turbines decrease property value.”

Several other residents in attendance spoke up to put on record they were against wind turbines, saying they would ruin the natural landscape of the small county.

Board Vice Chairman Steve Malavolti told the assembled audience ultimately the board does approve or disapprove proposals, however, the legwork is done by the zoning board, with input from public hearings. The board, he said takes into consideration the recommendations of the zoning board, who, he emphasized work for the county’s constituents.

“We’re just trying to get some facts here,” said board member Tony Rue. “No one on this board has ever talked to anyone from Scout before. We’re here so we can get some facts so we can talk to you when you have questions. We brought them here so we know the right information to give you.”

Supervisor of Assessments Tammy Mehalic in her presentation on the economic impact, said the windfarm, if it existed in the county right now, would bring in just less than $1.5 million in tax revenue.

“Without growth, the tax rate will continue to go up,” Mehalic said. “Wind power isn’t necessarily the answer, but revenue needs to come in.”