The University of Illinois Extension Office announced three volunteers Wednesday would be inducted into the Illinois 4H Hall of Fame, and Wednesday was a chance to extend a message to each of them: Thank you. 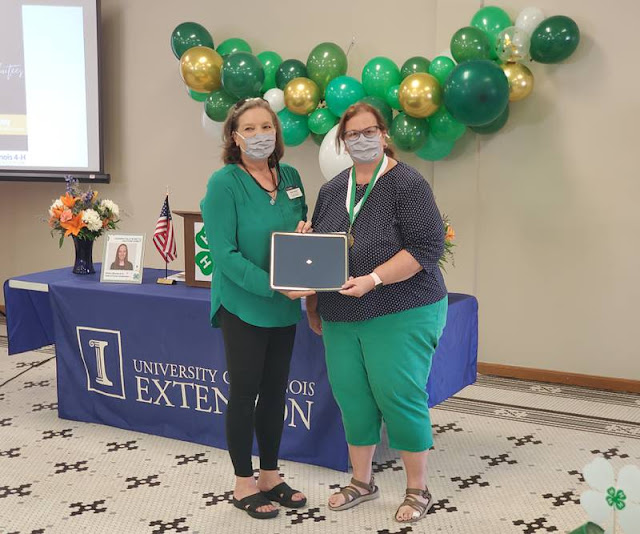 The Hall of Fame awards are hosted yearly to highlight and commemorate outstanding leaders, volunteers and supporters of Illinois 4H. It was established in 2005 and its members have a track record of exemplary service and contribution to 4H.

Each inductee received a Hall of Fame medallion, commemorative scrapbook page and certificate of induction.

Frueh was nominated by Bureau County 4H Youth Development Program Coordinator Danielle Gapinski for all she has done for the program.

As Executive Director of the Bureau County Farm Bureau, Frueh has partnered with the extension for 4H opportunities including organization of the Master Showmanship contest, Olympic style games during the 4H fair, Beyond the Banners livestock clinic, among other items.

“(Frueh) is always willing to help,” Gapinski said. “She is positive, knowledgeable and an excellent advocate for 4H.”

“(Arbet) is a true, passionate and supportive leader to our 4H Youth Development Program and to (U of I) Extension,” Pienta said. “(Arbet) exemplifies the heart of 4H.”

Arbet has been involved as a club leader, a resource to improving 4H programs, a fair board member and much more in between.

“When ideas are needed and we ask for input and help, (Arbet) is always willing to take the time to help,” Pienta said. “We appreciate (Arbet) so very much.”

Palm is an active Marshall-Putnam 4H volunteer and serves as the leader of the Wenona Highlighters community club, a superintendent at our 4H show, secretary of the Marshall-Putnam 4H Association, a member of the University of Illinois Extension Unit Council and helps with the county fundraiser yearly.

“(Palm) always goes above and beyond what is expected of a 4H volunteer,” Scheel said. “Her commitment to 4H and her kind spirit have made (Palm) a valuable member of the Marshall-Putnam 4H Program.”

Wednesday’s celebration was a moment for 4H members and supporters to gather and thank the three for everything they have done for the organization.