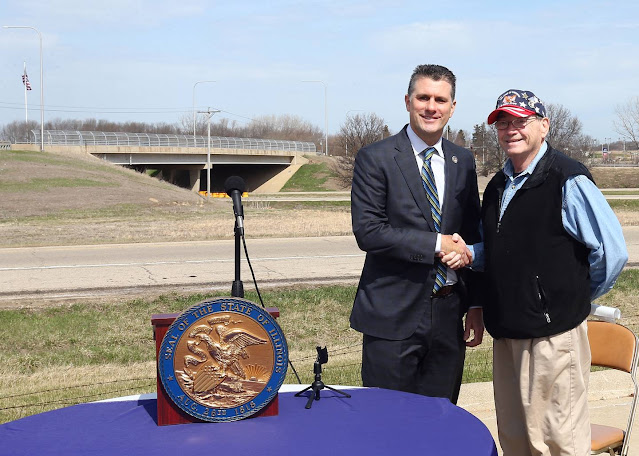 Hollinsaid was a local who grew in Lake Wildwood, graduated from Princeton High School and enlisted in the U.S. Army in 1995. He rose to the rank of Staff Sergeant and was killed in action while serving in Iraq on April 7, 2003.

While serving, Hollinsaid requested a transfer to a different division so he would have a greater chance of serving in combat.

“This bridge here is over I-80, which is one of our nation’s premier highways and also has the Flags of Freedom flying over it,” said Dan Hollinsaid, Lincoln Hollinsaid’s father. “I cannot think of a better way to honor and remember Lincoln.”

Hollinsaid was an avid outdoorsman who enjoyed hunting and fishing and loved most of all his family, friends and his country.

“I am beyond honored to have played a role in ensuring that his name and legacy will be enshrined and remembered by our future generations,” Stoller (R-Germantown Hills) said.

Stoller was joined by Princeton Mayor Joel Quiram and Hollinsaid’s parents for a news conference to commemorate the occasion.

“Lincoln Hollinsaid, or Link as his friends and family called him, was an American hero who bravely put his life on the line in defense and service of our nation,” Stoller said.

Stoller was excited to see the many years of work finally become a reality. The legislation that made this naming possible was passed during the very early morning hours on Saturday, April 9.

“Almost 19 years ago to this day, Staff Sgt. Hollinsaid made the ultimate sacrifice for our country when he was killed in action while serving in Iraq,” Stoller said. “Naming this bridge in his honor is the least that we as a nation and state can do.”

During Tuesday’s event, the Hollinsaid family was presented with the legislative resolution from the Illinois General Assembly, officially naming the bridge after their son.

Dan said he was incredibly proud to pursue and accomplish this honor in memory of his son and the sacrifice he made for his country.

“People are going to drive across this bridge and his name will be there,” Dan said. “When they see his name, some of them are going to remember him while others may ask the question, ‘Who was Staff Sgt. Lincoln Hollinsaid?’ As his father, it is up to me to make sure that Link is remembered, which is why we pursued this naming.”

Quiram said the commemoration will create a great tribute to Hollinsaid for generations to come.

“There is no finer tribute to Staff Sgt. Lincoln Hollinsaid than to name this prominent bridge in Princeton in his memory,” Quiram said. “This enduring tribute will forever remind us of his valiant sacrifice for our country.”

Quiram said there will be signs placed on the bridge to commemorate the occasion by the Illinois Department of Transportation and the city plans to host a dedication ceremony during the upcoming Homestead Festival.