Group reaches fundraising goal of $5,000 for the American Foundation for Suicide Prevention

At 7 p.m. Wednesday while many locals were sitting down for dinner or relaxing on the couch; Gracie Ciucci and her friends were embarking on a fundraising journey to honor her late father, Eric Ciucci. 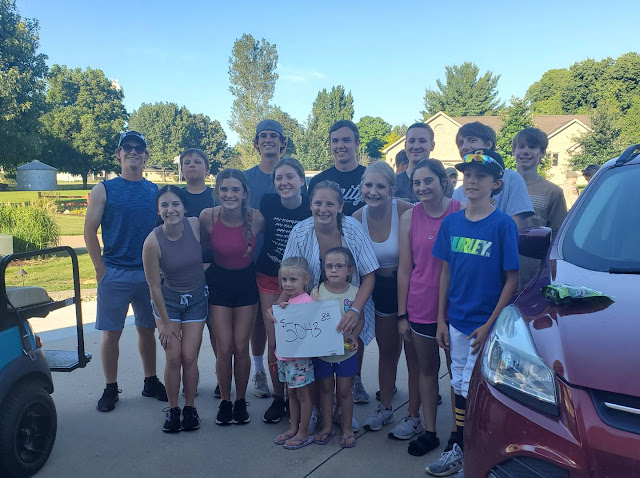 Eric died by suicide in 2014 at the age of 37. He was the Putnam County Girls Golf Coach and is remembered around the community for his impact on the local youth and love for his family.

Inspired by a video on TikTok, Ciucci and her friends decided to complete the 24 miles in 24 hours challenge. The event involves participants running a mile at the top of every hour for a day.

“When I first saw it I didn’t think the challenge would be that hard, but I was wrong,” Ciucci said. “It’s definitely a sacrifice and you’re constantly watching the clock.”

Ciucci added many of the participants complete the challenge with very little sleep to be sure they do not miss a top-of-the-hour run.

“We sleep a little bit, but very little because we are afraid if we sleep we are not going to wake up,” Ciucci said. “We have so much riding on it that we would be disappointed in ourselves and we wouldn’t want to do that to people who are supporting us.”

This year, after first completing the challenge in 2020, Ciucci decided to once again honor her father while raising funds for the Illinois Chapter of the American Foundation for Suicide Prevention.

“Suicide has hit close in my family specifically and I know it hits close in this community nowadays,” Ciucci said. “There’s not many people that you meet where suicide hasn’t touched someone and it’s not talked about a lot. We think it should be talked about more in order to save lives and spread awareness about it before it’s too late.”

The runners have run multiple routes around Hennepin and even made some special trips to neighboring Granville and McNabb to change up the scenery and give those in other communities a chance to show their support.

“We’ve had so much support; a lot more than last time,” Ciucci said. “I think we got the word out a lot better. The first mile there were so many people there with some even sticking around for the next few miles.”

Ciucci also added the Putnam County Sheriff’s Department helped the group by lighting the way throughout the night and giving them a safe escort on their mission.

With the added support, the group looked to raise $5,000 for the American Foundation for Suicide Prevention; a goal that just minutes before departing for the final mile Ciucci was informed they were able to surpass.

“We wanted to set the goal to leave room for God to work in it,” Ciucci said. “Even if we didn’t make the goal, we can’t be upset about it because every dollar is going to do something.”

Through the support of family, friends, local law enforcement and runners who stopped by for a mile or two; the 24 hours are something Ciucci won’t soon forget.

The group finished their 24-hour marathon with a final route in Hennepin around the pool and was greeted with smiling faces and rounds of applause from many within their community.